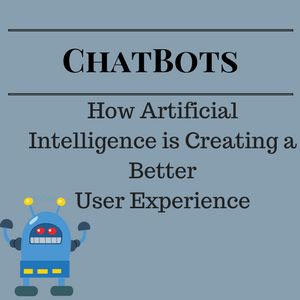 ChatBots, once the product of inventive sci-fi writers (such as Arthur C. Clarke’s HAL, the “sentient” computer), may be one of the most useful customer service inventions for business of modern times.

While computers, software and the myriad of apps that have been produced (is there an app for that?) have greatly improved many areas of the customer experience, the one thing often lacking is the personal, “human” touch that people crave.

Competition in this high speed digital world is staggeringly fierce for most businesses.  Mom and Pop can no longer simply rely on their local hardware store being the only store in town to sell lawnmowers, because everybody in town has a computer and can order one from a large chain in the city or even a fully online store, often with free shipping, for less.  The local store is no longer simply competing locally.  They are now in direct competition with many other stores, sometimes literally on the other side of the globe.

This issue of personal service was recognized a number of years ago as being one of the drawbacks of doing business online.  Smart businesses began to realize that while being able to shop online was initially exciting for many people, the glaring lack was the human touch.  They discovered that when a customer could chat with someone either by voice or text, the likelihood of them buying something went way up.

The answer to this new challenge was live chat.  Software was developed that would notify a business when someone was on their website.  Someone at the business center would then ask the visitor if they had a question or needed help, much as would happen in a traditional store (with good service).

The idea proved to be fantastic for closing sales.  People loved the personal service.  It instantly created  a better UX.

But competition again put the pressure on and a challenge began to develop.  It was not a level playing field.  Stores in countries where wages are notoriously lower than in the Western world began to capitalize on their advantage.   They sourced the same basic products as their Western counterparts, but with much lower labor costs for the personal service.

Added to that is the fact of our 21st century world that many of the educated people in the countries with ridiculously lower labor costs are now almost as fluent in Western languages as native speakers.  It is becoming increasingly rare, for example, even in live chat, to find oneself speaking with someone whose accent is so thick it might as well be another language!

Once again, businesses came up with an idea that has worked reasonably well for many to this very day.  They contracted out their customer service.  Simply put, they hired the same people their competitors were using for their own customer service.  Most service centers used by Western businesses, today, are not even in the same country as the business they are serving.

While this has worked reasonably well, especially for larger companies, competition is still piling on the pressure.  Operating profit margins continue to decrease, requiring businesses to come up with other ways to cut operating costs to survive.  The reality is, like it or not, labor costs are often just about the only place where there is even a possibility of cutting costs.

One of the ways small businesses have dealt with this is simply for the owners to put in more hours, themselves.  This can be very counterproductive and also has very obvious limits.

Artificial intelligence (AI) is proving to be the best answer humans have yet come up with to enhance the user experience, while drastically reducing costs.  The evolution of AI is exponential.   Simply put, as AI “learns,” it begins to learn faster.  Everything that a “bot” learns potentially adds to its ability to learn more.

AIs have long been able to talk to each other, as can be observed in this fun experiment from 2011. In fact, Cleverbot has been online since 1997.  As AI evolves, the conversations between AIs is becoming more complex and  humanlike, at least in flow and sound, all the time (and sometimes just as silly).

Furthermore AIs can now teach each other and learn from each other.  Once again, this represents a huge increase in the speed and evolution of AI learning.

How does this apply in the world of business?  In 1950, a man named Alan Turing developed what is now referred to as the Turing Test.  Essentially, it was a test designed to evaluate a machine’s ability to demonstrate intelligent behavior that is indistinguishable from human behavior.  The test was a text only exercise, thus eliminating the need to accurately synthesize live human speech.  The object of the test was to see if a real human could tell that the “person” on the other end of the chat was human or a robot.

While the Turing Test, itself, is no longer really relevant, due to the fact that it is so simple to cheat, the idea has continued to evolve. Today, there are still competitions to fool judges into thinking they are talking to a real human, and in fact, many people online are being tricked by bots, every day.  Estimates as far back as 2014 (ancient history in modern technology) were that more than 60% of online traffic was generated by bots.  That has likely increased, as they become more sophisticated.

Many people today are lured into clicking on links by ChatBots that appeal to the baser instincts such as the desire for sex or money.  AI has become much more sophisticated, able to emulate human behavior like never before.

This has been the goal in the creation of the ChatBot.  For business, the creation of an AI that can text chat with customers in a natural way that simulates a real human is a huge win.  More an more websites now feature a pop up or other visible window or link offering instant chat services.

Rather than clicking a support link and experiencing the “A customer service representative will be with you shortly” or similar message, there is a customer service rep “standing by waiting to serve you” the moment you click the button.  Instead of waiting, the conversation begins immediately, and is often almost indistinguishable from a real human.

In fact, ChatBot technology in 2017 is very, very good.  We have reached the point where virtual assistants – aka AI ChatBots – are being seriously considered for banking and financial institutions.  The financial benefit to those institutions is staggering.

The latest in ChatBot technology is rapidly going far beyond text messaging.  Today, companies like IBM and others are racing to produce ChatBots that appear on the screen as visually, rhetorically and even emotionally human.

This new breed of ChatBot can not only carry on a conversation with human-like interaction, but sounds human and looks human.  Soul Machines in Auckland, New Zealand, has created “emotional intelligence,”  capable of mimicking human expression, but even more, able to read and react to human emotions via the visitor’s webcam.

Creator, Mark Sagar,CEO of the company says that his goal is to make web based human services more humane and completely avoid continuing the use of cold, emotionless text chat.  In his words, “It’s much easier to interact with a complex system in a face-to-face conversation.”  There very human-like ChatBot, Nadia, is currently used by the Australian government to help users with disabilities on the national insurance website.

The MIT Technology Review on March 22, 2017 published an article entitled, “Customer Service Chatbots Are About to Become Frighteningly Realistic.”  What do you think?  Is this really frightening, or is this just one more step along the very exciting path that innovations in technology is creating?  Will this improve UX, or will it one day turn on us?

We’d love to hear from you in the comments, below.

5 thoughts on “ChatBots – How Artificial Intelligence is Creating a Better User Experience?”